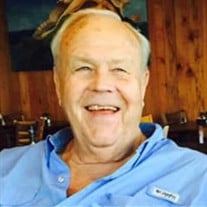 Warren McRae Crum aka “Smiley”, a child of God, went home to be with the Lord on February 13, 2020 at the Margaret Z. Dozier Hospice House in Tallahassee, Florida after a courageous battle with lung cancer. He was 78 years of age. He was born on July 13, 1941 in Crawfordville, FL to Henry and Rosa Lee Crum and was a lifelong resident of Panacea, FL. He was married to the love of his life, Maribeth Roberts Crum on March 10, 1962 until her passing in March of 2016. He worked as a contractor for over 60 years building many homes around the coast and served the community as a school board member for 16 years and a county commissioner for 12 years. He was a member of the Florida Highway Patrol Auxiliary, a U.S. Marine Corps veteran and a Mason. Also, he assisted his brother, Glynwood with organizing the first ambulance service and volunteer fire department in Wakulla County. His hobbies included fishing, hunting, drag racing, gardening, mentoring the youth of Wakulla County and spending time with family. He is survived by his three children; Jamie Crum (Michelle) of Panacea, FL, LeShan Smith (Bryan) of Tallahassee, FL and Jarrod Crum (Melissa) of Bonaire, GA; eight grandchildren, Cami Bernales (Nick), Bethany Lassiter (Adam), Cyndal Crum (Blake), Macey Kirk (Ronnie), Jarrod Crum (Kristin), Marisa Crum, Morgan Smith, Meredith Smith; and six great-grandchildren, Anabelle and Camille Bernales, Kylie and Brantley Lassiter, Rylee Morrison, Cayden Marks, Bryson Kirk and Rylen Smith; one sister, Mec Martin (Frazier) and three brothers, Kenny Crum (Jeanie), Ronald Fred (Eloise) and Donnie Crum (Alicia) and many nieces and nephews that loved him dearly. He was preceded in death by his wife, Maribeth Crum, his parents, Henry and Rosa Lee Crum and his brother, Glynwood Crum. Visitation will be held on Monday, February 17, 2020 from 4:00 pm to 7:00 pm at Family Funeral Home and Cremation. 3106 Crawfordville Hwy, Crawfordville, FL. Funeral services will be held on Tuesday, February 18, 2020 at 11:00 am at the Panacea First Baptist Church, 38 Otter Lake Road, Panacea, FL. After the conclusion of the service, friends and family are invited to graveside. His final resting place is Panacea Cemetery. In lieu of flowers, the family request donations be made to Margaret Z. Dozier Hospice House, 1723 Mahan Center Blvd., Tallahassee, FL 32308 or the Panacea First Baptist Church, P.O.,Box 116, Panacea, FL 32346. Skip Young of Family Funeral Home & Cremation Services is assisting the family with arrangements (850-926-5919) or familyfhc.com.

Warren McRae Crum aka &#8220;Smiley&#8221;, a child of God, went home to be with the Lord on February 13, 2020 at the Margaret Z. Dozier Hospice House in Tallahassee, Florida after a courageous battle with lung cancer. He was 78 years of age.... View Obituary & Service Information

The family of Warren McRae Crum created this Life Tributes page to make it easy to share your memories.

Warren McRae Crum aka “Smiley”, a child of God, went home to...