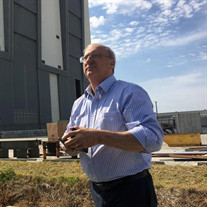 Thomas William Traxler 66, passed away unexpectedly at home on Monday, January 20, 2020. Tom was born on June 8, 1953 in Painesville, Ohio, to Hayes Robert Traxler and Wanda Colleen Davidson Traxler. He moved to Tallahassee when he married the love of his life Sharon, over 33 years ago. Thomas was always a hard and dedicated worker, and has been working at the Florida State University College of Law for more than 10 years. Family was the world to Tom and he was an amazing husband and father to two boys and two girls. He was the "doer" in the family, making sure everything was taken care of from the cooking, grocery shopping, and cleaning (and his cleaning was sometimes too good because he was notorious for getting rid of things). He absolutely loved life and did whatever he could to make everyone smile. The Traxler family has always been a very close family and Tom made sure that continued as the children have now grown into adults. Tom never met a stranger and he had friends from all walks of life, from co-workers to University Presidents. He was a real "people person" and would strike up a conversation with anyone, anywhere, at any time ..... including whatever stranger happened to be sitting next to him at the movie theater! In addition to loving his family, Tom was also enthralled with aerospace research, NASA, and aeronautics. He loved visiting the Kennedy Space Center (where the obituary picture was taken) and Cape Canaveral along the Space Coast of Florida. His wife Sharon recently purchased a membership for Tom at the George C. Marshall Space Flight Center in Huntsville, Alabama, which is the largest NASA center and where Saturn Launch Vehicles were developed for the Apollo program. Sharon had plans to take Tom there in the near future. Maybe the family can make the trip together in his honor. The family believed they would have many, many years to come with Tom and they are already missing him terribly. Tom is survived by his devoted and loving wife Sharon Traxler, and his children who thought the world of him, Clayton Traxler, Anna Traxler, Leah Boles and her husband John, and Wilson Traxler and his wife Dakota. He is also survived by two sisters Debra Rothermel and her husband Terry, and Kandy Saxon. Tom was predeceased by his parents and his brother Greg Traxler. One of Tom's dearest friends told Sharon that Tom loved 3 things: 1. Family, 2. Florida State University (the school and the football team), and 3. NASA. And he couldn't have been more correct. Tom was loved by many, and liked by all. A genuinely good-hearted, caring, and funny guy. He will be sorely missed by all of those who were lucky enough to know him. Sharon and the kids could not have been more proud of Tom and the role model he was for them all. A Celebration of Thomas W. Traxler's Life is being held at the Rotunda of the Florida State University College of Law on Tuesday, January 28th, 2020 at 4:00 p.m. All of those who knew Tom are invited to come and share stories and good memories about Tom with his wonderful family and countless friends. p.s. Tom - just between you and her, Leah says "squeeze one, two, three, and is waiting for the fourth." The family is being assisted by Skip Young and cared for by Jackie Fulford of Young Fulford Funeral Home and Crematory, Tallahassee, Florida.

Thomas William Traxler 66, passed away unexpectedly at home on Monday, January 20, 2020. Tom was born on June 8, 1953 in Painesville, Ohio, to Hayes Robert Traxler and Wanda Colleen Davidson Traxler. He moved to Tallahassee when he married... View Obituary & Service Information

The family of Thomas William Traxler created this Life Tributes page to make it easy to share your memories.

Thomas William Traxler 66, passed away unexpectedly at home on...

Send flowers to the Traxler family.