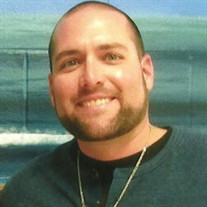 Robin Parrish Williams was born on October 4, 1979 in Jacksonville, FL and died on December 13 , 2019 in Kansas City, MO. He lived his younger years in Tallahassee, FL and moved with his family (Ray, Angie, Brooks and Shelby) to a home on the beautiful Wakulla River in 1988. Robin learned to love the water; fishing, boating and swinging off the big rope swing at his dock. Life on the river and Wakulla County was good and Robin played baseball, soccer and football in the recreation league growing up. He played baseball and soccer at Wakulla High School and was a player on Wakulla’s first District champion soccer team in 1997, and Regional runner-up in 1998. Robin earned a soccer scholarship to Thomas University in Thomasville, GA after graduating from WHS. Robin worked in the construction trades and also as a woodworker/cabinet maker. He built elevator cabinets at Residential Elevator and worked at the St Marks Powder plant. His real love was fishing. He had become an excellent fisherman over the years, fishing the Wakulla River and Apalachee Bay. Robin obtained his Captain’s license and guided redfish and speckled trout charters for several years. In 2013, Robin’s love of the water and boats led him to a job in the maritime industry. Robin started work as a deckhand on a towboat pushing barges on the Gulf coast and Mississippi River. Robin progressed quickly to a tankerman classification with Kirby Inland Marine. Robin was still employed by Kirby until shortly before his death. In 2014, Robin had a religious experience and conversion while walking along the shore of Apalachee Bay. From that moment on, he dedicated his life to spreading the word of Jesus Christ and helping his fellow man. Robin’s faith journey eventually led him to Kansas City, MO and the International House of Prayer where he became involved in their community. Robin is survived by his parents, Lewis Rayburn (Ray) and Angela Parrish Williams of Wakulla; his brother Brooks Rayburn Williams and wife Brittani; and his sister Shelby Adriane Worrell and husband Reid. Robin leaves several Uncles and Aunts; Dennis Brindley and Melanie Brindley of Seneca, SC; Greg and Stephanie Robinson of Woodstock, GA; and Bobby and Jan Pearce of Wakulla. Robin was an Uncle to nephews Caden Rayburn Williams and Easton Lewis Worrell, and nieces Madison Kent Williams and Joanna Margaret Worrell. Robin is survived by his maternal grandmother Joanne Parrish High and husband James, and great aunt Jeannette Coody of Valdosta, GA. Robin was preceded in death by his maternal grandfather, Malary Ives Parrish (Mack), and paternal grandmother Reba Y. Williams (“Reebie”) of Madison, FL. A memorial service for Robin will be held on Saturday, December 21, 2019 at the Sopchoppy Southern Baptist Church, 117 Curtis Mill Rd, Sopchoppy, FL. Visitation is at 10:00 AM and the Memorial Service is at 11:00 AM. There will be a reception following the service. In lieu of flowers, donations can be made to the International House of Prayer, Kansas City, MO or Capital City Church, Tallahassee, FL. Skip & Trey Young with Family Funeral Home in Crawfordville, FL are assisting with arrangements, (850) 926-5919 Familyfhc.com

Robin Parrish Williams was born on October 4, 1979 in Jacksonville, FL and died on December 13 , 2019 in Kansas City, MO. He lived his younger years in Tallahassee, FL and moved with his family (Ray, Angie, Brooks and Shelby) to a home on the... View Obituary & Service Information

The family of Robin Parrish Williams created this Life Tributes page to make it easy to share your memories.

Robin Parrish Williams was born on October 4, 1979 in Jacksonville,...