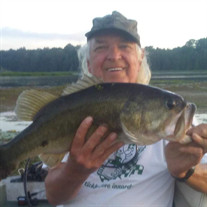 Richard Dewayne (Ricky) Avery of Crawfordville, Florida, passed away January 15, 2021 at Capital Regional Medical Center after a brief illness. Ricky was born October 13, 1953 to John and Voncile Brock Avery in Bainbridge, Georgia. On June 16, 2010 he married Lesilie Frazier and they celebrated 20 wonderful years together. Richard was of the Baptist Faith and attended New Life Baptist Church in Tallahassee, Florida. He was retired from Pepsi Cola Bottling Company and since retiring, he fished at any and every opportunity. He was an avid gardener with a green thumb that loved sharing his bounty with family and friends. Ricky was not one to travel far from home but made the exception to visiting out of state to visit those grandchildren. Ricky is survived by his wife Lesilie Avery of Crawfordville, sons Jeff Avery (Sara) & Jason Avery (Anayeli Rojas) of Columbus, Ohio. Grandchildren Tyler Avery Maxwell of Cairo, Georgia, Richard, Ryan, Destiny, Trinity, Madelyn Avery of Columbus, Ohio & Phoenix Roberts of Berkeley, California. Brothers Randall Avery & Ronnie Avery of Cairo, Georgia. Sister Diane Pilcher (Earl) of Woodstock Georgia. Sister in law Clarcia Avery. Sister and brother in law Toni and Wesley Scott. Bonus sons from his marriage to his beloved wife, Judd Miguel of Tallahassee, Florida & Johnny Gilliam of Nashville, Tennessee. He was preceded in death by his parents, brother Raburn Avery and bonus son Christopher Miguel. A Memorial Service will be held at New Life Baptist Church on Saturday, February 13, 2021 at 1:00 pm. Skip and Trey Young are assisting the Family with arrangements. Family Funeral Home at Harvey Young Chapel.

The family of Richard Dewayne Avery created this Life Tributes page to make it easy to share your memories.

Send flowers to the Avery family.