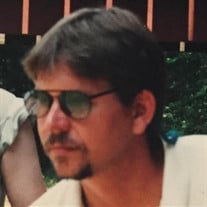 Peter Adam Williams passed away on Friday, September 22, at his home in Sopchoppy. He was 52. Born on April 6, 1965 in Providence, Rhode Island, Pete and his family moved to Sopchoppy in 1973. Pete grew up in the old Mt. Beasor Primitive Baptist Church on the Sopchoppy River. The family renovated the church into a wonderful home, including adding the “back house.” Pete loved living in the church, and many of his fondest memories were of growing up on the Sopchoppy River. In recent years, he had remodeled the back house to include a kitchen and bathroom, turning it into his own personal “man cave” where he lived during his final years. Pete and his mother, Ruth Ann Williams, worked diligently and successfully to get the “The Church” listed on the National Historical Homes Registry. An avid outdoors man, Pete loved hunting, canoeing, camping, and bicycle racing. While in high school, Pete and his brother Phil were founding members of Tallahassee Velo Sport, a club for 10-speed bicycle racing enthusiasts. In the summer of 1980 at age 15, Pete, Phil, and friend Ted Gilbert rode their bikes up the East coast to Woods Hole, MA. During the winter break of his junior year in high school, Pete trained at the Olympic Cycling Training Camp in Colorado Springs, CO. Pete attended Sopchoppy Elementary School and Wakulla High School. His family moved to Tallahassee in 1981, where Pete graduated from Lincoln High School in 1983. He attended Tallahassee Community, then began his life’s work in the construction and painting industries. Pete loved working with his hands and could build or fix anything. When Pete’s father passed away in 2003, Pete built the casket in which his father was buried. It was an exquisite work of art, made of Juniper wood with a cross on top. Pete also was an excellent cook, and truly enjoyed preparing and serving gourmet meals for family and friends. Pete’s loving heart, beautiful spirit, and sensitive soul will be missed by many. Pete was preceded in death by his father, Dr. Theodore “Ted” Williams. He is survived by his mother, Ruth Ann Williams of Tallahassee; his brothers Philip Williams of Minneapolis, MN and Craig Williams of Tulsa, OK; his sisters Polly Williams of Boston, MA and Laura Muir of Tallahassee. Also mourning Pete’s passing are numerous other family members and friends. There will be a graveside service at the West Sopchoppy Cemetery at 10:00 am on Saturday, September 30th. Pastor John Quinton of Sopchoppy United Methodist Church is officiating. Following the ceremony, the family will receive friends at “The Church” on the Sopchoppy River. Bring a covered dish for the luncheon, to share with family and friends. Skip Young of Family Funeral Home in Crawfordville is handling the funeral arrangements. “Home is the sailor, home from the sea. And the hunter, home from the hill.”

Peter Adam Williams passed away on Friday, September 22, at his home in Sopchoppy. He was 52. Born on April 6, 1965 in Providence, Rhode Island, Pete and his family moved to Sopchoppy in 1973. Pete grew up in the old Mt. Beasor Primitive Baptist... View Obituary & Service Information

The family of Peter "Pete" Williams created this Life Tributes page to make it easy to share your memories.

Peter Adam Williams passed away on Friday, September 22, at his...

Send flowers to the Williams family.