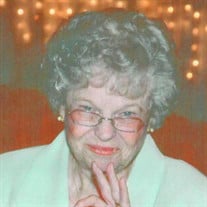 Nora Dale Holmes, 88, of Crawfordville, peacefully passed away at her home on February 25, 2021, surrounded by her immediate family. Nora was born March 5, 1932, in Jennings, Florida. She grew up in Jackson County, but attended the School for the Deaf and Blind in St. Augustine, Florida. After graduation, she attended Lively Vo-Tech, where she became skilled in Clerical-Secretarial work. She also received her sign language teaching certificate and taught many to sign. She and her husband, David Lawrence (deceased) raised their 2 children in Tallahassee while she worked for the Secretary of State's office in the Capitol Building. She moved to New Port News, Virginia and was employed by the Naval Shipyard, then moved to Alexandria, Virginia to work at the Pentagon until her retirement. She later married Darwin Holmes and lived in Royal Palm Beach, Florida until his death in 2008. She then moved to Crawfordville. Nora was a faithful member of the Capital City Christian Church in Tallahassee and was very active in their deaf Sunday School program. Nora never backed down from a challenge. She loved to sew, crochet, knit and enjoyed all sorts of crafts. She also enjoyed traveling and meeting people. She never met a stranger and never let her deafness interfere with her life. She was a lifetime member of FAD (Florida Association of the Deaf). She is survived by her daughter Janette "Jan" Pope (Kirk), her son Alton Lawrence (Loretta), sister Dora Fletcher, brother J.B. Dale, step-children Caroline Partin, Tawny Holmes & Lyman Holmes (Kathy), sister-in-law Annie Meryl Dale, 8 grandchildren and 13 great grandchildren. Nora was also preceded in death by her parents Alton & Leola Dale, brother Frank Dale and sister Nadine Lamb. Memorial Service will be held Saturday, March 13, 2021, 10:00 am at the Capital City Christian Church 6115 Mahan Drive Tallahassee 32308. Due to Covid and the request of the family, the service will be Live Streamed from www.cccctally.org In lieu of flowers donations may be made to Big Bend Hospice 1723 Mahan Center Blvd. Tallahassee 32308; 850-878-5310; bigbendhospice.org Skip & Trey Young with Family Funeral Home at Harvey Young Chapel are assisting the family. 850-926-5919 Familyfhc.com

Nora Dale Holmes, 88, of Crawfordville, peacefully passed away at her home on February 25, 2021, surrounded by her immediate family. Nora was born March 5, 1932, in Jennings, Florida. She grew up in Jackson County, but attended the School for... View Obituary & Service Information

The family of Nora Dale Holmes created this Life Tributes page to make it easy to share your memories.

Send flowers to the Holmes family.