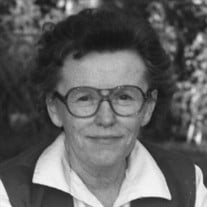 Marion Scott Dunbar, 95, of Crawfordville, Florida, died on June 2, 2016. A memorial service will be held on June 11, 2016, at 11:00 am, at Family Funeral Home and Cremation Services in Crawfordville, Florida. Marion led a full and varied life. After marrying Robert Bruce (Bob) Dunbar on March 2, 1939, she spent a number of years raising children while Bob was away on active duty in the Army. She kept the home fires burning while he spent three years away in combat zones in World War II and yet another year in the Korean war. Her indomitable spirt and love of family, her own as well as Bob’s, served her well during these years of ration books and lack of many basic necessities. When peace finally came, she joined Bob in post-war Japan where she and the children immersed themselves in a new culture while Bob helped in the reconstruction efforts of a war torn nation. The family eventually returned to the States and Bob continued to serve in the Army for many years. After being a helpmate and partner to Bob in many endeavors, at mid-life Marion attended community college to pursue a certification as a Housekeeper. Employed by a brand new hospital in Central Florida as the Head Housekeeper, she helped establish the policy and procedures for her department. She continued to serve in that capacity for another 10 years. Upon retirement, she and Bob moved from Central Florida to Crawfordville where they spent their remaining years traveling and enjoying the extended family. Marion’s ready smile, boundless curiosity and outgoing personality were her trademarks. A lover of animals, pets were her constant companions and a great comfort in her later years. Marion is survived by a son, James Dunbar of Crawfordville, and a daughter, Barbara Taillefer of Welaka, and six grandchildren and four great grandchildren. She was preceded in death by her husband, Bob, and her oldest son, Robert Bruce Dunbar of Monrovia, California. The arrangements are under the care of Skip Young with Family Funeral Home & Cremation Services. 850-926-5919 Familyfhc.com

The family of Marion Scott Dunbar created this Life Tributes page to make it easy to share your memories.

Send flowers to the Dunbar family.