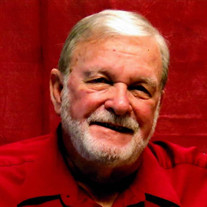 Luther (Luke) Frazier, 82, of Crawfordville, passed away February 21, 2020, at the Margaret Z. Dozier Hospice House in Tallahassee, Florida. He was born February 26, 1937, in Kingsport, Tennessee, to his parents Philip and Lillie Frazier. Luke worked as a Heat Treatment Engineer Supervisor for Caterpillar in Peoria, Illinois. After leaving Caterpillar, he became a Program Director for the Boys Club of America in Chattanooga, Tennessee. After moving South, he worked briefly as a Tugboat Captain in Mobile, Alabama. He settled in North Florida where he worked for over 20 years in maintenance at General Dynamics, and retired in 1999. Beginning at an early age, Luke enjoyed the outdoors where he enjoyed hunting, bird watching, but his true passion was fishing. This passion carried over to his later years where you could always find him with a fishing pole in his hands, or at least nearby. In his retirement years, he received his Captain's license and operated his own fishing guide service. He loved to share his favorite fishing spots and his passion for the sport. He also wrote weekly articles for the Wakulla News, where everyone knew him as Captain Luke. He was well known for ending his articles with "I may not know every fish by name, but I know where they live." After the guide business, he worked at Angie's Marine Supply to age 80, where he continued his abundant knowledge of fishing. Luke's other passions included reading, spoiling his grandchildren, and telling stories. Luke was a member of Lake Ellen Baptist Church where he volunteered for the Alzheimer's Respite Project for over ten years, also was involved with the Fellowship of Christian Athletes for many years and loved Alabama & Florida State University College sports. Survivors include his children, Melanie K. Roberts and husband Doug, Julie Frazier, and James Finch, all of Crawfordville, Florida, Dyann Carr and husband Greg of Texas, his brothers Phil Frazier and wife Leta, Samuel Frazier and wife Barbara, eleven grandchildren, five great grandchildren, and very special family friends, Mike and Colleen Crum, and Caleb Harper. He was predeceased by his wife Joyce Frazier, parents Philip and Lillie Frazier, and step son Donald Finch. The family will receive friends Tuesday, February 25, 2020, 10:00 am at Lake Ellen Baptist Church in Crawfordville and the Celebration of Life will begin at 11:00 am. In lieu of flowers, the family would like donations made to the Margaret Z. Dozier Hospice House in Tallahassee, FL. Skip & Trey Young with Family Funeral Home are assisting the family with their arrangements. 850-926-5919 Familyfhc.com

The family of Luther "Luke" Allen Frazier created this Life Tributes page to make it easy to share your memories.

Send flowers to the Frazier family.