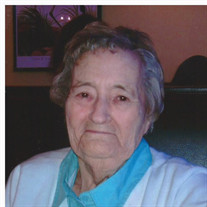 Linnie Estelle Ramsey Kelly, 88 passed away on Thursday, August 24, 2017. She stepped from this life to join her husband, James Thomas Kelly (J.T.) in heaven. She is celebrating today with Jesus! Estelle or Kelly as she was known to many of her friends was born in Blountstown, Florida. She was raised in Albany, Georgia. Her family included two sisters and 4 brothers. She married J.T. Kelly in 1945 and moved to Tallahassee where she helped him in running his painting company, Modern Decorating. She had a day care in their home, but it was more than babysitting, the children became part of the family. On Saturdays, after he retired, they could be seen at the Tallahassee Flea Market where they sold the items he designed and made from wood. She was a member of First Baptist Church Woodville where she was very active until the later stages of Alzheimer's Disease prevented her from attending. She loved God, her family, her church and she especially loved the members of her Sunday School class. She was always a loving caregiver and friend to whoever needed help. She instilled in her children, grandchildren and great grandchildren a desire to help others. She was loved and will be missed by her three daughters: Ann Kelly (Bobby), Linda Boles (Ray) and Mary Johnson (Patrick), her ten grandchildren Kelly Meaux (Moe), Bob Dollinger (Jess), Jim Dollinger (Kimberly), Sarai Winkelman (Paul), Amanda Marks Bass, Amy Lamarche (Louis), Michael Gerrell (Kelly), Mindy Zinser (Jeremy), Kyle Marks and Kyle Johnson (Amy), her twenty-six great grandchildren and two great great grandchildren. She is also survived by two sisters Daisy Smith and Dimple Wills and four brothers Billy Ramsey (Ludie), Jimmy Ramsey (Mary Frances), Ben Ramsey (Carolyn) and Bruce Ramsey (Alice) and many cousins, nieces and nephews. She will also be missed by the parents and the many children she helped raise through the years, her friends from her church and her loving caregiver Linda Tanner (Rick) who became like a fourth daughter and a special close friend Ann Hughes and her husband Lex Hughes. In lieu of flowers, donations may be made to First Baptist Church Woodville, 9500 Woodville Highway, Tallahassee, Florida 32305 (850) 421-3315 or to Big Bend Hospice 1723 Mahan Center Blvd. Tallahassee, Florida 32308 (850) 878-5310. Special thanks to Chuck Cascio and the staff at Eden Springs Nursing Facility and Leslie, Ed, Ashley and Marvin from Hospice. Visitation will be held on Sunday, August 27, 2017 from 3:00-5:00 pm at First Baptist Church Woodville. Services will be held Monday, August 28, 2017 at 10:00 am at First Baptist Church Woodville. Burial will follow at Roselawn Cemetery in Tallahassee, Florida. Arrangements are under the care of Skip Young with Family Funeral Home & Cremation Services. 850-926-5919 Familyfhc.com

Linnie Estelle Ramsey Kelly, 88 passed away on Thursday, August 24, 2017. She stepped from this life to join her husband, James Thomas Kelly (J.T.) in heaven. She is celebrating today with Jesus! Estelle or Kelly as she was known to many of... View Obituary & Service Information

The family of Linnie Estelle Ramsey Kelly created this Life Tributes page to make it easy to share your memories.

Send flowers to the Kelly family.