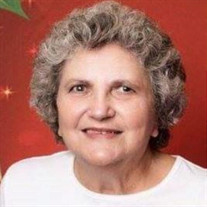 Lillie Mae Poole Goodson, widow of Lambert Goodson, died January 1, 2022 at her home in Crawfordville, Florida. She was 83 years old. Lillie Mae Poole was born on June 17, 1938 in Dellwood, Florida, to John Council and Eror Gray Poole. She graduated from Dellwood Elementary School and from Greenwood High School at age 15. She began working with Jackson County Judge Robert L. McCrary Jr. while in high school and worked for Judge McCrary for several years. She worked as a secretary for the District Managers of Gulf Life Insurance Company in Marianna until the offices were moved to Panama City. At that time, she became the secretary and pay roll clerk for Warner Brothers in Marianna where she worked until 1959. Following her marriage to Lambert Goodson on April 11, 1959, she moved to Crawfordville, Florida where her husband was stationed with Florida Game and Fresh Water Fish Commission. She began working at Florida State University in the Athletic Department in 1959 and then moved to the Extension Home Economics Department where she worked until that department was transferred to the University of Florida in Gainesville. Mrs. Goodson served as the secretary to FSU Presidents John Champion and Stanley Marshall. She was appointed Judicial Secretary to Justice B.K. Roberts, Supreme Court of Florida, a position she held until his retirement from the court. She was Administrative Assistant to the Judicial Council of Florida until that entity was abolished and the duties and staff were transferred to the Attorney General of Florida. After working for a number of years for Florida Attorney Generals Jim Smith and Robert A. Butterworth she accepted a position as Legislative Assistant to then Secretary of State Jim Smith. Her career in the Florida Department of State included working for Secretaries Smith, Mortham, Harris, Smith, Detzner, and Hood. After more than 40 years of service to the people of Florida, Mrs. Goodson retired June 30, 2003. Following her retirement she became more involved in activities of her church. She enjoyed attending her Sunday school class, participating in Young at Heart activities and serving on many committees of the church body. Mrs. Goodson is survived by the joy of her life, her daughters, Tammie and husband Steve Marks, Joanna and husband Duane Colvin, Jackie Goodson and her beloved grandson Robert and wife Erika Marks, great grandsons Tiger Davis, Kade and Lambert Marks all of Sopchoppy. She is also survived by her brother Brannon Poole of Marianna, Florida and many nieces and nephews as well as a host of dearly beloved friends. She is preceded in death by her husband Lambert Goodson, brothers R.C. Poole, Julius Poole, Cohen Poole, David Poole and sisters Evelyn Williams and Helen Allen. Funeral Service will be at the First Baptist Church of Crawfordville on Thursday, January 6,2022 at 11:00 am. The family will receive friends one hour prior to service, 10:00-11:00 am. Interment will be at the West Sopchoppy Cemetery at 2:00 pm. Family Funeral Home in Crawfordville is handling the arrangements. In lieu of flowers the family has asked that you make donations to Big Bend Hospice or Crawfordville First Baptist Church.

The family of Lillie Mae Poole Goodson created this Life Tributes page to make it easy to share your memories.

Send flowers to the Goodson family.