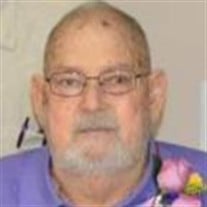 Leon Michall Lesley, 71, of Crawfordville, Florida went to be with the Lord on Friday, March 22, 2019, surrounded by his loving family and friends. He was born in Lake City, Florida on June 4, 1947, to the late John Miller Lesley and Catherine... View Obituary & Service Information

The family of Leon Michall Lesley created this Life Tributes page to make it easy to share your memories.

Leon Michall Lesley, 71, of Crawfordville, Florida went to be...

Send flowers to the Lesley family.