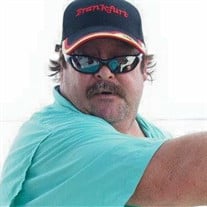 "Joseph Earl Morgan turned the last page in his earthly story, Saturday, August 29, 2015. There will never be another Joe. He was arguably the hardest working man alive. He had a vibrant, childlike appreciation for life and dreamed with an impossible optimism. He had a truly sincere respect for all people. He judged no one. His hands were callused and his body was worn and he had grit. His heart was equally as kind, generous and self-sacrificing, as he was tough. Joe built a business from the ground up with his wife, Karen, of nearly 35 years. He built a home with his hands where they raised their four children. He built a family with his leadership. He was a cornerstone in the lives of his children and the lives of those he claimed as his children, including nearly a dozen nieces and nephews. He loved his three daughter-in-law and his son-in-law and welcomed them into his family with all of his heart. He was the most enthusiastic, loving "Poppie Joe" his five grandchildren could ask for. Joe was a force of nature in perpetual motion. If he wasn't working, he could be found building, driving tractors and bulldozers with his brother Dan, going out on the boat with his brother Mike, floundering in the waters of Spring Creek with Mitch, eating and laughing with Wayne or John or one of his old friends,demolishing or constructing anything his imagination could conjure with one of his sons or just on his own, giving himself to help someone else for no reason at all. He was a Sopchoppy gardener, brilliant in his trade, a selfless humble friend and a courageous leader. We are thankful for the years we had with him and even for the precious hours before his sudden departure. We will always have a gaping hole in our hearts, knowing that he is away, but we rejoice to know we will see him again and never have to say goodbye." He is survived by his wife Karen Morgan, daughter Jessica Oxedine (Chad), 3 sons Joey Morgan (Carolyn), Justin Morgan (Courtney) & Jarrod Morgan (Shelby Avery), 2 sisters Terry Hillier & Elaine Ferreira, 2 brothers Mike Morgan & Danny Morgan, 5 grandchildren Judge, Jed, Nolan, Arabella & Lily Grace and his father Earl Edwin Morgan. He is predeceased by his mother Charlotte Evelyn Morgan. The family will receive friends Thursday, September 3rd from 6:00-8:00 pm with a Celebration Service to follow at 8:00 pm at Family Funeral Home 84 Ochlockonee Street Crawfordville. There will be a Celebration of Life gathering Saturday, September 5th 2:00 pm at the Creek House on Stewart Cove Road in Spring Creek. Arrangements are under the care of Skip Young with Family Funeral Home.

"Joseph Earl Morgan turned the last page in his earthly story, Saturday, August 29, 2015. There will never be another Joe. He was arguably the hardest working man alive. He had a vibrant, childlike appreciation for life and dreamed with an impossible... View Obituary & Service Information

The family of Joseph E. Morgan created this Life Tributes page to make it easy to share your memories.

Send flowers to the Morgan family.