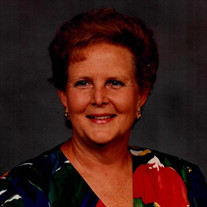 JoAnn Blanton Council Norris, met her Savior Jesus Christ on Saturday, January 16, 2021 surrounded by her family. She was born on September 9, 1935 in Pike County, Alabama to Hurbert Hillary Blanton and Elizabeth Truman Beck Blanton. She attended Troy State Teachers College in her hometown, and after receiving her Bachelors Degree in Education, she began her teaching career in Montgomery, Alabama. Her brother Harold Blanton, encouraged her to move to Crawfordville, where he served as principal of Crawfordville High School. She met her landlord Dennis Council, and soon after became his bride. She loved the Crawfordville Community and her many students. Dennis and JoAnn moved to Tallahassee, where she taught at Kate Sullivan and Hartsfield Elementary until she retired after 33 years of service. After retirement Dennis and JoAnn returned to Crawfordville where they built their home on the Council Homestead. During retirement they enjoyed renovating a cabin in Andrews, North Carolina, and spending time with family and friends there. They also loved bus tours, going to Maine and the Grand Canyon. A family trip to Alaska was also a highlight. JoAnn (Grand Jan, GiGi, as her grandchildren called her) loved attending ballgames, dance and music recitals, horse shows and any event where her grandchildren performed, cheering then on and afterward treating them with flowers and ice cream. Dennis passed away in 2005, and JoAnn met her high school sweetheart, Marvin Norris after a reunion they enjoyed 8 years of marriage until his death in 2018. JoAnn was an active member of Crawfordville First Baptist Church, where she served as a deacons wife, active in Bible School, Young at Heart, taught the Gleaners Sunday School Class and helped start the Christmon Tree Tradition and Wednesday night dinners. JoAnn was predeceased by her parents Hubert and Elizabeth Blanton, brother Harold Blanton and sisters Hilda Smith and Linda Edison. She was blessed to love and be loved by two husbands, Dennis Council and Marvin Norris, also deceased. She is survived by her two daughters Tanya English and her husband Brian and Ann Payne and her husband Mark and five grandchildren Justin (Lisa), Annabeth (Walker), Elizabeth, Ansley Kate and Ayden Grace. The family wishes to express their deepest gratitude to JoAnn's primary caregiver Cynthia Godbolt, for over 15 years of love and dedication during her lengthy illness, and also the Big Bend Hospice for the past two weeks of providing support and compassion. A Celebration of her Life will be held at the Crawfordville First Baptist Church, Monday, January 18, 2021 at 11:00 AM, and the family will receive friends starting at 10:00 AM one hour prior to the start of the service. Interment will follow at the Council Cemetery. Donations may be made the the First Baptist Church of Crawfordville Gleaner's Sunday School Class 3086 Crawfordville Hwy. Crawfordville, Florida; 850-926-7896; www.crawfordvillefbc.com and/or Big Bend Hospice 1723 Mahan Center Blvd. Tallahassee, Florida; 850-878-5310; www.bigbendhospice.org Skip and Trey Young are assisting the family. Family Funeral Home at Harvey Young Chapel. 850-926-5919 Familyfhc.com

The family of JoAnn Blanton Council Norris created this Life Tributes page to make it easy to share your memories.