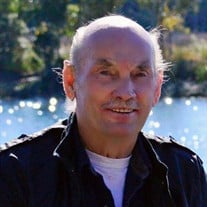 Jim Bobby Ward, 88, of St. Marks, died at the Margaret Z. Dozier Hospice House, with his family, August 8, 2017. He was born August 14, 2017 in St. Marks and has been a lifetime resident. He had enlisted in the U.S. Navy and soon after, began... View Obituary & Service Information

The family of Jim Bobby Ward created this Life Tributes page to make it easy to share your memories.

Send flowers to the Ward family.