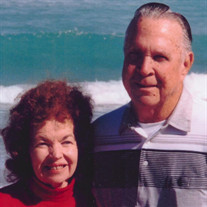 James (Jim) Gaylon Pafford, born in Chattanooga, Tennessee on October 28, 1928, passed away on Friday, November 15, 2019 in Tallahassee Florida. During the end of his life journey, Jim was surrounded with love by his family. Jim’s parents moved from Tennessee to Miami, Florida when he was one. He grew up in the Allapattah area of Miami, attending Orchard Villa Elementary and Miami Edison High School. In 1944 at the age of 16, Jim and his family moved to a farmhouse in Chipley Florida where he attended Chipley High School. In 1945 the family returned to Miami where Jim met the most amazing woman, Betty Wheeler, his younger sister, Piercie’s best friend. It was love from the beginning and they had their first date at a local drugstore where they talked for hours. After Betty graduated from high school, Jim was drafted into the US Army. They stayed in close contact & then married in Folkston, Georgia on October 7, 1951. They moved to Petersburg, Virginia where Jim was stationed until he was shipped overseas during the Korean War. Jim returned to the US to reunite with his sweetheart Betty and to celebrate the birth of their first baby. Jim began working as a printer for the Miami News through an apprenticeship provided by the military to help with new careers after his service ended. Jim eventually started his own printing business, J & B Press, working alongside his wife and partner, Betty Ann. Jim was very proud of their business, providing excellent printed materials for companies in South Florida. Jim dedicated his love, time and wisdom to his family including Betty, his two children & five grandchildren. When Jim & Betty decided to sell the business and retire, they moved to Tallahassee where his youngest sister lived. Jim loved Tallahassee because it reminded him of “the rolling hills of Tennessee” where he was born and still had family members living there. Jim was a thoughtful, intelligent and caring man. He enjoyed listening to country & gospel music, fishing, attending church service, driving by farms and woods, gardening, watching/listening to birds and being outdoors. It was a joy to spend any quality time with his wife, children and grandchildren and great grandchildren. To Jim, “family comes first.” Jim is survived by his son, James Roy Pafford (Pamela Elizabeth Pafford), daughter, Judith Pafford Wills (Herbert Wills IV), grandchildren; Jared Martin Taber, James Harold Pafford (Jessica Dennis Pafford), Jason James Taber (Dr. Deb Trusty), Amanda Elizabeth Pafford Capece (Christopher Capece), William Galen Pafford (Bethany Pafford) and five great grand-children. He was preceded in death by his wife of 66 years, Betty Wheeler Pafford, his mother Sophia Pafford, father Roy Pafford, a brother and four sisters. Family will receive friends on Friday November 22, 2019, 1:30 - 2:30 pm at the Bethel United Methodist Church, 1470 Bethel Church Road, Tallahassee with funeral service to begin at 2:30 pm. Burial will follow immediately after the service at the church cemetery. Donations in memory of James G Pafford can be made to the Bethel United Methodist Church and mailed to 1470 Bethel Church Road, Tallahassee, FL 32310. The family would like to extend special thanks to the staff at Pacifica Woodmont, Big Bend Hospice and Right at Home for their compassionate care. Skip & Trey Young are assisting the Pafford family with their arrangements. 850-926-5919 Familyfhc.com

James (Jim) Gaylon Pafford, born in Chattanooga, Tennessee on October 28, 1928, passed away on Friday, November 15, 2019 in Tallahassee Florida. During the end of his life journey, Jim was surrounded with love by his family. Jim&#8217;s parents... View Obituary & Service Information

The family of James Gaylon Pafford created this Life Tributes page to make it easy to share your memories.

Send flowers to the Pafford family.