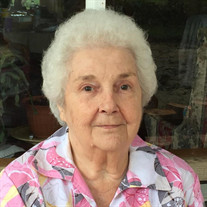 Ina Carmen DuTart Corley died at the Margaret Z. Dozier Hospice House on January 3, 2021, at age 92. She was a loving mother, grandmother, great-grandmother, and friend. Carmen was born in Jacksonville, Florida on September 8, 1928 to Donna Inez Adams Raker and James Elias DuTart. She grew up in Mt. Pleasant, SC and later in Wakulla County, FL. As a teen, she enjoyed playing basketball, working at Wakulla Springs, and dancing. Always dancing. In 1946, Carmen graduated valedictorian from Crawfordville High School. Her exemplary work ethic and determination was evident throughout her life. In her younger years, she worked at the Wakulla Springs Soda Fountain. In the early 1950’s, she traveled to New York City and worked as a Key Punch Operator for IBM. Eventually, she returned to Florida and began working as a State of Florida employee for 42 years. Twenty five of these years found her at the Public Service Commission where she served as Personnel Director. It was here that she made many life-long friends. She retired in 1993. In 1957, Carmen married George Lloyd Begley, Jr. from Surgoinsville, TN. While married, they lived in Bradenton and Tallahassee, Florida. During their married life they had four children – Mike, Sally, Jeanie, and Julie. This marriage ended in divorce in 1965. Carmen later married George Leon Corley from Sopchoppy, FL. They married in 1970 and were married until his death in 1983. Throughout her life, Carmen had many passions, interests, and past times. She deeply loved her family and friends with a big and selfless heart. She treasured the times spent with those she loved whether it be at an extended family gathering, church, traveling, special events, or just going out for lunch. She especially enjoyed making memories with her “PSC Ladies.” She was a life-long member of the Crawfordville United Methodist Church. During this time, she served on many committees. Until her death, she was active in the Women’s Night Circle. She also enjoyed traveling around the United States. Her travels took her to places such as the Smokey Mountains, Niagara Falls, Key West, Las Vegas, and the Hoover Dam. In her later years, Carmen became an expert at solving Word Search puzzles. She also enjoyed playing Shanghai Rummy, and most recently Rummikub, with her family. On quiet days, she loved gazing over the pasture in front of her house and watching birds at the bird feeder outside her kitchen window. Each evening, she shared a meal and TV time with her daughter, Jeanie and son-in-law, Wayne. Carmen is survived by her children: George Michael Begley and Kim of Crawfordville, FL; Sally Begley Perkins and Don of Helena, AL; Jeanie Begley Carter and Wayne of Crawfordville, FL; and Julia Begley Fleming and Frank of Crawfordville, FL. Grandchildren: Drew Begley (Natalie), Brett Perkins (Jennifer), Sydney Begley (John), Adam Perkins (Casey), and Kaylee Perkins; and great-grandchildren Aylah, Charlotte, Owen, and Iris. Carmen was preceded in death by her parents James Elias DuTart and Donna Inez Raker, husbands George Lloyd Begley, Jr., and George Leon Corley, and brother, Herbert Thompson Raker. The family will receive friends Tuesday, January 5, 2021, 5:00-7:00 pm at Family Funeral Home in Harvey Young Chapel. Funeral Service will be Wednesday, January 6, 2021, 11:00 am at the Crawfordville United Methodist Church and Interment will follow at the Crawfordville Cemetery. Memorial Donations may be made to Crawfordville United Methodist Church. P.O. Box 37 Crawfordville, Florida 32326; 850-926-7209; www.crawfordville-umc.org Skip & Trey Young with Family Funeral Home at Harvey Young Chapel are assisting the family with their arrangements. 850-926-5919 Familyfhc.com

Ina Carmen DuTart Corley died at the Margaret Z. Dozier Hospice House on January 3, 2021, at age 92. She was a loving mother, grandmother, great-grandmother, and friend. Carmen was born in Jacksonville, Florida on September 8, 1928 to Donna... View Obituary & Service Information

The family of Ina Carmen DuTart Corley created this Life Tributes page to make it easy to share your memories.

Send flowers to the Corley family.