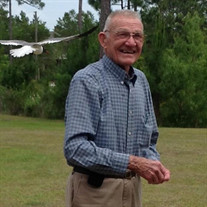 Homer Inman McMillan, 89, passed away April 23, 2020 surrounded by his loving family. He was born September 18, 1930, in Enigma, Georgia, to Pearly and Lucile McMillan. Homer had four brothers, four sisters, and one cousin raised as a sister. He attended elementary school and graduated high school in Enigma and studied agriculture at Arkansas State University and the University of Georgia. Homer joined the United States Air force July 21, 1947, and married Erma Louise McMillan April 22, 1951, in Oklahoma City, Oklahoma. Staff Sargent McMillan was stationed in Oklahoma, Washington, Japan, and Korea (Korean War Veteran) as a communications cryptographer. He was a store manager for the Kroger Company in Chattanooga, Tennessee, before joining Econo-Flo Flour and moving his family to Carrabelle, Florida, in the spring of 1964. He was a member of Fellowship Baptist Church, Carrabelle, Florida, where he served as a long-time bus director for children’s ministry, chair of the missions committee, and deacon. He worked alongside his son as a church planter and was ordained as a minister at Faith Baptist Church in Elizabeth City, North Carolina. A life-long joy for him was planting and harvesting his garden. He was truly a kind man that loved God, family and friends. Homer was preceded in death by his father, mother, stepmother (Mary Hammond McMillan), and seven siblings. He is survived by his wife of 69 years, Louise, and their five children: Beverly (Mark); Dale (Vance) Carrabelle, Florida; Shirley, Grain Valley, Missouri; Diane (David) Cypress, Texas, Homer II “Mac” (Dee), Carrabelle, Florida, and one sister, Ruby Jean Gates (Floyd) Melbourne, Florida. He had 11 grandchildren, 13 great-grandchildren, one great-great grandchild and many nieces and nephews. His loving family will miss him dearly but celebrate as he is with his Lord and Savior. Graveside Services will be at Evergreen Cemetery, in Carrabelle, Sunday, April 26, 2020 at 3:00 pm. Skip & Trey Young with Family Funeral Home are assisting the family with their arrangements.

Homer Inman McMillan, 89, passed away April 23, 2020 surrounded by his loving family. He was born September 18, 1930, in Enigma, Georgia, to Pearly and Lucile McMillan. Homer had four brothers, four sisters, and one cousin raised as a sister.... View Obituary & Service Information

The family of Homer Inman McMillan created this Life Tributes page to make it easy to share your memories.

Send flowers to the McMillan family.