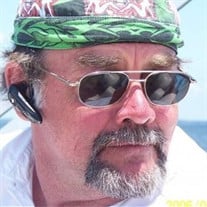 George D. Johnston III was lifted by the Lord on Friday morning, June 3rd, 2016 at the age of 66 years old. Family and friends are invited to attend visitation on Tuesday evening, June 7th, from 6:00pm to 8:00pm at the Family Funeral Home, 84 Ochlockonee Street, Crawfordville, Florida. Graveside service will be held Wednesday morning, 10:00am, at the Tallahassee National Cemetery on 5015 Apalachee Parkway, Tallahassee, Florida. His cousin, Reverend John Bush from Montgomery, Alabama, will officiate. Military Honors will follow. In lieu of flowers, the family requests contributions be made to Big Bend Hospice, 2889 Crawfordville Highway, Crawfordville, Florida, 32327. George is the son of George and Dorothy Johnston. He was born in Columbus, Georgia and is preceded in death by his Mother and Father. He is survived by four siblings, Michael Johnston (wife Katy) of Tallahassee, Florida, Thomas Johnston (wife Robin) of Lexington, South Carolina, Connie Kolias (husband George) of Crawfordville, Florida, and Robert Johnston (wife Lori) of Yellville, Arkansas. George entered the Army Security Agency in April of 1969, and attended school at Fort Devens, Massachusetts. He served in Vietnam for one year attached to the 330th Radio Research Company. He was awarded the Army Commendation Medal, Good Conduct Medal, National Defense Medal, Vietnam Service, Campaign and Cross of Gallantry w/Palm Medals, and received a Meritorious Unit Citation. He was honorably discharged in April of 1972. He earned an AA from Tallahassee Community College, and attended the FSU School of Business. He was a customer service engineer for Lanier Worldwide for 20 years in the rural counties surrounding Tallahassee. In 1990 he moved his family to Wakulla County where he became a real estate associate and land developer. George D Johnston III was a loving husband to Jeanne Michele Johnston for 47 years. He was loved and adored by his children, Jason (wife Corinne), Chelsea (husband Bryan), and his grandchildren, Era Glenn, Jacob, and Michael. He loved God, his family, his Country, all his dear friends, and Wakulla County. He enjoyed fishing, exploring nature, and sharing his stories with everyone. Arrangements are under the care of Skip Young with Family Funeral Home & Cremation Services. 850-926-5919 Familyfhc.com

George D. Johnston III was lifted by the Lord on Friday morning, June 3rd, 2016 at the age of 66 years old. Family and friends are invited to attend visitation on Tuesday evening, June 7th, from 6:00pm to 8:00pm at the Family Funeral Home,... View Obituary & Service Information

The family of George Johnston created this Life Tributes page to make it easy to share your memories.

George D. Johnston III was lifted by the Lord on Friday morning,...

Customized sympathy cards. Mailed for you.