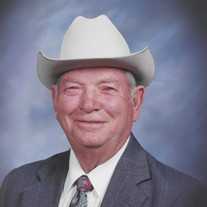 Franklin Randolph Roberts of 360 Roberts Landing Road, Sopchoppy, FL 32358 passed away on Monday, May 7, 2018 at home with his loving wife and family. He valued others and felt blessed to have family and friends that he loved. He was born in a log cabin on property near his lifelong home on January 4, 1932 to Ted and Winifred Roberts. During his senior year at Sopchoppy High School, he was awarded a scholarship to the University of Florida for his Future Farmers of America Turpentine Farming Project. After only a short time in college, he joined the Marines and served from 1951-1954. Following his honorable discharge, he trained at Lively Technical School and became a Master Electrician. In pursuit of further training in electronics, he joined the Army and served from 1958-1961. During the following years, he worked for Dictaphone Corporation, City of Tallahassee Sam O. Purdom Generating Station, Olin Corporation, and St. Marks Refinery. From 1978-1980, he served in the Navy Reserve. Later, he expanded his business, Roberts Repair, and established Blackwater Industries as an electrical and mechanical contractor. He sold his business and retired on January 1, 1994. Learning new things and working were always driving forces in his life. Growing up and throughout most of his adult life, he was a tree farmer; raised hogs and cows; maintained Roberts Landing (boats, cabins, and boat ramp); grew crops and operated a sawmill on his property. He loved music and enjoyed playing the violin and guitar in his younger years and played the harmonica later in life. Gospel and country music were his favorites. He enjoyed fellowship with others and serving the community. As an active member of the Sopchoppy Lions Club from 1984-2018, he was always participating in projects such as picking up paper along county highway 375, cooking hamburgers for school functions, selling mullet plates and brooms to raise funds for the club to purchase glasses for people in need, and other projects. He served multiple years as president, vice president, and on a variety of committees. He was a member of the American Legion. For 43 years beginning in 1973, he was a part of Troop H of the Highway Patrol Auxiliary devoting hundreds of hours maintaining safety at ballgames and on the highways. He was a devoted Christian man involved in his church as evidenced by his attendance in all services. Through the years, he served in many capacities - as deacon since 1971, Sunday School teacher, Brotherhood Director, trustee, and on committees within the church. After being very involved in the planning and building of Sopchoppy Southern Baptist Church, his ministry was maintenance and repair of the church facility. Survivors include his wife of 67 years, Gracie Corley Roberts; his children - Sharon Kemp and Theodore “Teddy” Roberts (Becky) of Sopchoppy, and Darlene Surber (Gene) of Headland, AL; sisters - Connie Mathers (Frank), Peggy Mock, and Mary Lou Ely (Marvin) of Crawfordville; five grandchildren, one great grandchild, and many nieces, nephews, and cousins. He was preceded in death by his parents Ted and Winifred Roberts, a baby sister, and Son-in-Law Bernie Kemp. Visitation: 6:00-8:00 PM, Thursday, May 10, 2018, Sopchoppy Southern Baptist Church located at 117 Curtis Mill Road. Funeral: 10:00 AM, Friday, May 11, 2018, at Sopchoppy Southern Baptist Church. Interment: Following funeral at Vause Branch Cemetery located 10 miles west of Sopchoppy on Smith Creek Highway. Arrangements are under the care of Skip Young with Family Funeral Home & Cremation Services. 850-926-5919 Familyfhc.com

Franklin Randolph Roberts of 360 Roberts Landing Road, Sopchoppy, FL 32358 passed away on Monday, May 7, 2018 at home with his loving wife and family. He valued others and felt blessed to have family and friends that he loved. He was born... View Obituary & Service Information

The family of Franklin Roberts created this Life Tributes page to make it easy to share your memories.

Send flowers to the Roberts family.