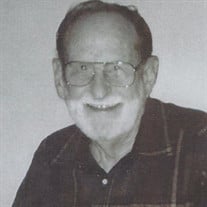 Frank Goodnow Stanton December 22,1918-September 14, 2016 Frank Goodnow Stanton experienced by participation ninety-eight years of our nation's military history and rapid technical development as a pilot, an engineer and father of four accomplished scientists. He was born in Payette, Idaho, the second of three children of William Archibald Stanton and Alice Adelia Goodnow. Frank grew up working in his parent's grocery and trucking business. With a BS degree in Industrial Engineering and the urging of his first wife (Jorl) Ruth Guttersen, they joined the Army Air Corp to see the world. Frank flew C-47s as a Philippian bush pilot during WWII, was base Fire Chief while conducting ice operations in Greenland, built the first pipeline crossing Spain while finishing his Master's degree in Civil Engineering, then Thailand continuing on to Hawaii in charge of all Air Force base construction in Southeast Asia, and finally Nebraska on the Strategic Air Command War Staff. He retired a Colonel in 1970 with 26 years active service in the US Air Force. Frank and Ruth, with their four sons, became global citizens living and extensively traveling our planet; mid-stream adding the two boy's of Ruth's sister. In retirement, Frank and Ruth built a traditional home on the Chesapeake Bay when not traveling around North America (Canada, America and Mexico) wearing out several motor homes. Frank was assisting his second son in building an underground home in Wakulla County, Florida when his wife died of COPD in 1995. He later met in Oregon at an RV retreat and married Iris Gudim Crump staying at the Chesapeake home when not on the road in their RV. Due to the onset of old age, both Frank and Iris permanently moved into the Florida underground home receiving at home care by his son and family. Iris passed in 2013 and now Frank in 2016. Frank is survived by his four sons: Laird Wilvin living in Virginia, Gregg Ramsey (& Ann) living in Florida, Frank Gilbert (& Fenny) in Hawaii and Keith Nelson living in Oregon; and two grown grandchildren by Gregg & Ann: Eric & Nicole. Burial Service will be held Tuesday, September 20, 2016, 2:00 pm at the Tallahassee National Cemetery. Arrangements are under the care of Skip Young with Family Funeral Home & Cremation Services.

The family of Frank Goodnow Stanton created this Life Tributes page to make it easy to share your memories.

Send flowers to the Stanton family.