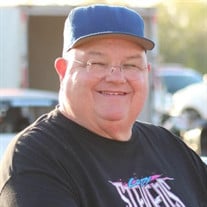 Duke Stevens was born April 16, 1948, in Tallahassee, Florida, and claimed his heavenly reward on April 4, 2022. He was well known for his expertise as a mechanic and welder. He followed in his Father’s footsteps in that he loved to work on all things mechanical, and he passed this love on to his family. His Father also taught him the love for racing, and Duke has passed this on to the next three generations. He was a well-known engine builder and consistently posted wins! The camaraderie found around the racetrack is something special. For some, racing isn’t just a pastime, it is a passion that brings joy and unites generations. For Duke, it was a way of life. His working career included Sears, Alford Chevrolet, and Centel/Sprint/Centurylink. As a Tallahassee native, he played high school football at Florida High and was frequently recognized for his outstanding accomplishments. Duke also loved and supported women’s softball at both Florida High and Florida State University. He and Cindy are active members of Immanuel Baptist Church. Duke is survived by his loving wife, Cindy Durham Stevens. He is also survived by his two sons, Rick Stevens (Kelly), and Wayne Stevens (Lisa); grandchildren Crystal Fukushima (Dustin), Ricky Stevens (Sadie), Sarah Stevens and Cody Stevens; five great-grandchildren, Kylie, Kate and Cameron Fukushima and Brantley and Mackenzie Stevens. His family was his pride and joy. He was preceded in death by his parents, Raymond and Helen Stevens of Tallahassee. A Celebration of Life will be held on Thursday, April 7, 2022 at Immanuel Baptist Church, 2351 Mahan Drive, Tallahassee, Florida. Visitation will begin at 10:00 am and the service will follow at 11:00 am. In lieu of flowers, donations can be made to the Immanuel Baptist Church Sign Fund. Skip & Trey Young are assisting the family. Family Funeral Home at Harvey Young Chapel.

Duke Stevens was born April 16, 1948, in Tallahassee, Florida, and claimed his heavenly reward on April 4, 2022. He was well known for his expertise as a mechanic and welder. He followed in his Father&#8217;s footsteps in that he loved to work... View Obituary & Service Information

The family of Duke Stevens created this Life Tributes page to make it easy to share your memories.

Send flowers to the Stevens family.