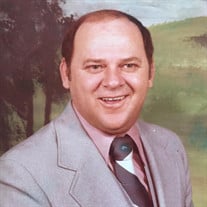 Dewey Wayne Roberts, 81, of Sopchoppy, Florida, passed away August 6, 2019 at Blountstown Rehab, where he resided for the past year and a half. Wayne was born in Dellwood, Florida, August 2, 1938. In the winter of 1939-1940 he moved to Sopchoppy, Florida where he grew up until his teenage years. He then moved to Grand Ridge, Florida, where he lived with his Uncle Doc & Aunt Lola Lawrence and attended and graduated from Grand Ridge High School. He enlisted in the Marine Corps, where he proudly served his country. Upon his return home he pursued several dreams, worked for Florida Highway Patrol in Marathon, Florida, he was the first Director for the Governor’s Highway Safety Commission for the State of Florida, he sponsored the Dale Carnegie Courses and was an Insurance Representative of Mutual of Omaha, Jackson National and Sun Life of Canada. Wayne leaves behind 2 daughters Tanya Owens and Cherie Carpenter & husband Billy all of Grand Ridge, son John Roberts of Tallahassee, 5 grandchildren Derrick Harrell & wife Melissa, Katricia Edenfield, Crystal McNeill & husband Daniel, Jenna Downs & husband Jared and Michael “Bubba” Carpenter & wife Jolie, 8 great grandchildren, his siblings Guy Hudson & wife Dinah, Herbert Roberts & wife Annette, Walter Roberts & wife Beverly, Tommy Roberts & wife Donna & sister in law Chris Roberts and many nieces, nephews & cousins, as well as many close friends. Preceded in death by his parents John & Mary Roberts and brother Andy Roberts. A Memorial Service will be held at the Sopchoppy Southern Baptist Church, where Wayne was a member, on Saturday, August 10, 2019 at 2:00 pm Eastern time. The family will receive friends from 1:30-2:00 pm. The family wishes to thank the great staff at the Blountstown Rehab and Calhoun Liberty Hospital, for the wonderful care given to our Father and to Dr. M. Farooqi for all the care he has given the last 10 years. Skip Young with Family Funeral Home & Cremation Services is assisting the family with their arrangements. 850-926-5919 Familyfhc.com

Dewey Wayne Roberts, 81, of Sopchoppy, Florida, passed away August 6, 2019 at Blountstown Rehab, where he resided for the past year and a half. Wayne was born in Dellwood, Florida, August 2, 1938. In the winter of 1939-1940 he moved to Sopchoppy,... View Obituary & Service Information

The family of Dewey Wayne Roberts created this Life Tributes page to make it easy to share your memories.

Send flowers to the Roberts family.