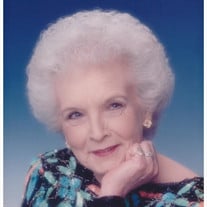 Daphine Parrott Cash, 85, of Crawfordville, died at her home, September 20, 2018. She was born October 23, 1932 in Stem, North Carolina and moved to Crawfordville in 1970, where she raised her family. Daphine Parrott Cash was a true Matriarch of the Cash Family; a woman who rules a family. Daphine’s home was her castle where all came to gather, to cry, to laugh, but most importantly, be wrapped in the unconditional love that was always present anytime you were around her. Daphine was the epitome of a sport-model! She was full of a no-nonsense attitude, quick witted and possessed a remarkable capacity for love and forgiveness. Daphine was also a meticulous quilter in her earlier years and made some real show-stoppers which she lovingly passed down to her family. She could slay you in a game of scrabble and play a mean game of Rubik Cube while loving every minute of it! She would shop until she dropped searching for that “reduced” pair of shoes, which she really didn’t need, but on the other hand, she would clean her closet to pass down her treasures and share with others. Daphine was a member of the First Baptist Church of Crawfordville and she was a member of her much-beloved Gleaners group; a group of friends that brought a sparkle to her eye and a much blessed sense of friendship and love. Survivors include her children Wanda Cash Bonesteel (Jerry), Bonny Cash Kyle (Clint), Jimmy Cash (Stephanie), sister Jean Knight, brother John Parrott, 10 grandchildren Michele, Nicole, Maggie, Kathryn, Tara, Anna, Daphne, Clint Ryan, Shelby & Tanner and 10 great grandchildren. Predeceased by her husband Willie Burton Cash, son Jerry Donald Cash and brother Billy Donald Parrott. A Celebration of Life Service will be held Monday, September 24, 2018, 11:00 am at the Crawfordville First Baptist Church. Arrangements are under the care of Skip Young with Family Funeral Home & Cremation Services. 850-926-5919 Familyfhc.com

The family of Daphine Parrott Cash created this Life Tributes page to make it easy to share your memories.

Daphine Parrott Cash, 85, of Crawfordville, died at her home,...

Send flowers to the Cash family.