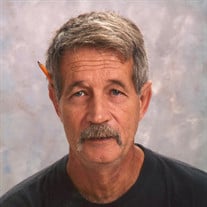 Daniel “Dan” Edward Evans passed peacefully into the arms of his Lord and Savior on October 26, 2021 at the age of 71. Dan was born in Des Moines, Iowa on October 8, 1950 to Edward and Ella Evans. Dan was raised farming corn, hay, and cattle until he left the farm at age 17. He worked construction and was a carpenter from the mid 60’s. He roofed many huge barrel barns and built beautiful homes in Colorado and Tallahassee. Upon retirement, he crafted beautiful artwork with tiny pieces of wood that fill his and Trish’s home. Dan was hard working, humble and kind. He was a friend to everyone, never met a stranger, and would help anyone any time he could. He always put his family first, especially his three wonderful young men. Dan was preceded in death by his parents, Edward and Ella Evans, his brother David Evans, and Seth Nettles, Trish’s adopted grandson. He is survived by his wife Trish Sowell Evans; sister Becky Laures (John) of Rochester, Minnesota; sons Ryan Weltz (Tara) of Canada, Joseph Evans and Sean Evans (fiancé Katie Simon) of Tallahassee, Florida; grandchildren Dolan, Isaac, and Zoe Weltz; Trish’s adopted grandchildren Sean and Sawyer Nettles of Tallahassee; one niece, Katie Nelson, and one nephew, Brad Nelson Patel (Anil) of Minneapolis, Minnesota. A celebration of Dan’s life will be held Sunday, November 7, 2021, at 3:00 p.m., The Elks Lodge, 276 N. Magnolia Drive. In lieu of flowers, Dan’s favorite charity was Veterans Association 40 & 8, which raises money for a nursing scholarship. Checks can be made to V1120, or a charity of your choice. Dan will be greatly missed by so many whose lives he touched. The family is being assisted by James Sircy and Jackie Fulford of Young Fulford Funeral Home and Crematory, Tallahassee, Florida. (850)610-4444 YoungFulford.com

The family of Daniel Edward Evans created this Life Tributes page to make it easy to share your memories.

Daniel “Dan” Edward Evans passed peacefully into the arms of...

Send flowers to the Evans family.