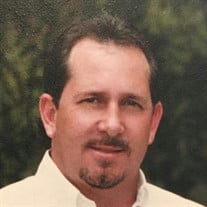 Charles Ferrell Barwick, 54, passed away Friday, February 10, 2017 in Kissimmee, Florida. Ferrell was born in Tallahassee, Florida to the late Charles Barwick, Jr. and Elise Ferrell Barwick and was raised in Wakulla County his entire life. He graduated Wakulla High School in 1981. Ferrell was a multi-sport athlete often bringing the crowd to their feet with a game-winning touchdown, layup or walk off homerun. He continued playing sports after high school by organizing and playing on flag football and softball teams. He also stayed involved with Wakulla’s athletic programs by supporting them as a spectator, booster, caterer and radio commentator for their football team. As much as he was a standout athlete, he was even more a standout father. Nothing brought him more joy or made him prouder than his two children, Mattie and Gabriel. Often known to wake them up as infants -- just as they fell asleep -- because he couldn’t stand not to hold them, he was devoted to every aspect of their lives. When he realized that his family seafood business could not financially support them due to the numerous environmental catastrophes and newly imposed laws, he joined the United Association of Pipe Liners Local 798 to provide for his family in the last four years, in addition to owning and operating Barwick Seafood. Even though he was often out of town for four months at a time, he more than utilized his cell phone and numerous family and friends to keep up with his children’s daily lives. He is preceded in death by his father, Charles Barwick, Jr. and his youngest brother, Shay Barwick. He will live in the hearts of his children, Mattie and Gabriel Barwick; his mother, Elise Ferrell Barwick; his brother, Parrish Barwick (Suzanne); maternal grandmother, Sheryl Ashmore Ferrell; nephew Shay Barwick II; niece, Sloan Barwick and numerous aunts, uncles and cousins. He was also predeceased by his maternal grandfather Emmett C. Ferrell Jr. and paternal grandparents Charlie & Lizzie Barwick. Contributions may be made to Wakulla Gridiron Club and/or Wakulla Diamond Club %Wakulla High School 3237 Coastal Highway, Crawfordville, FL 32327 850-926-7125. The family will receive friends at the Crawfordville First Baptist Church, where Ferrell was a lifelong member, on Wednesday, February 15, 2017 from 5-7 p.m. with a Celebration of Life Service on Thursday, February 16, 2017 at 11 a.m. Interment will immediately follow at the family cemetery in Crawfordville. Arrangements are under the care of Skip Young with Family Funeral Home & Cremation Services. 850-926-5919 Familyfhc.com

Charles Ferrell Barwick, 54, passed away Friday, February 10, 2017 in Kissimmee, Florida. Ferrell was born in Tallahassee, Florida to the late Charles Barwick, Jr. and Elise Ferrell Barwick and was raised in Wakulla County his entire life. He... View Obituary & Service Information

The family of Charles "Ferrell" Barwick created this Life Tributes page to make it easy to share your memories.

Send flowers to the Barwick family.