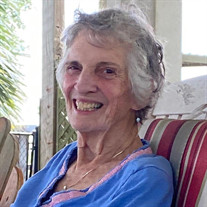 Carolyn Gates Scoville Brantley December 13, 1940 - August 16, 2020 Panacea, FL - Carolyn “Carol” Gates Scoville Brantley, 79, of Panacea, Florida passed away peacefully on Sunday, August 16, 2020 at Big Bend Hospice in Tallahassee, Florida after a brief illness. Carol was born December 13, 1940 in Macon, Georgia to Carolyn Gates Scoville and Wallace Waldo Scoville. Her family moved to Thomasville in 1943 where she was raised. She graduated from Thomasville High School and went to the University of Mary Washington before transferring to Mercer University in Macon where she graduated in 1963 with a Bachelor of Arts degree in History. She was a member of the Beta Sigma Chapter of Alpha Delta Pi sorority. In 1961, Carol married Lamar Brantley and together they had three children before divorcing in the late 1970s. Carol moved to Doraville, Georgia in 1977 and began work as an administrative assistant at Emory Clinic. She later worked at Arby’s corporate headquarters and General Motors. In 1989, Carol moved to Panacea, Florida to care for her mother and worked at PRIDE Enterprises of Florida in Tallahassee until her retirement. Carol had a love of reading, travel, animals, friends, and family - passions that she passed on to all her children. She is best remembered for her kind and generous personality and her beautiful, warm smile. She was a devoted member of Ochlockonee Bay United Methodist Church in Panacea where she was active in the Florida Conference United Methodist Women serving as a Trustee, a Recorder of memorials, and as District Level Secretary of Program Resources for the Northwest District. Carol’s extended family meant a lot to her and she researched the Newberry and Ansley family history and helped organize the annual Newberry reunion for many years. She was also a longtime member of the Birthday Club in Panacea and an avid college football fan. Carol was preceded in death by her parents. She is survived by and will be remembered with great affection and admiration by her children Catherine Savage of Alpharetta, GA; Nancy (Richard) Southgate of Lexington, KY; Philip Brantley of Doraville, GA; grandchildren Nicholas (Austin) Johnson-Savage of Canton, OH; Rebecca Savage of Alpharetta, GA; Oliver Brantley of Atlanta, GA; Owen Southgate of Chandler, AZ. She is also survived by her brother Gates (Kay) Scoville of Lula, GA; niece Jennifer Scoville of Murphy, NC; nephew Bobby (Linda) Scoville of Gainesville, GA; her former spouse Lamar Brantley of Chicago, IL; and her best friend and companion of 32 years, Billy Hudson of Panacea, FL. She also leaves behind her treasured rescue pets who will be cared for by family members. She will be buried alongside her parents in a private graveside service for immediate family only at Laurel Hill Cemetery in Thomasville, Georgia, on August 24, 2020; 11:00 am with Pastor John Quinton of Ochlockonee Bay United Methodist Church presiding. Due to COVID-19 restrictions, a celebration of life will be held at a later date. In lieu of flowers, memorial contributions may be made to the Ochlockonee Bay United Methodist Church, 2780 Surf Rd., Panacea, FL, 32346; Paws of Wakulla, PO Box 1195, Crawfordville, FL 32326; Friends of the Wakulla County Public Library, PO Box 1737, Crawfordville, FL 32327. Skip & Trey Young with Family Funeral Home at Harvey Young Chapel are assisting the family with their arrangements. 850-926-5919, Familyfhc.com

This Life Tributes page was made to make it easy to share your memories..

Customized sympathy cards. Mailed for you.