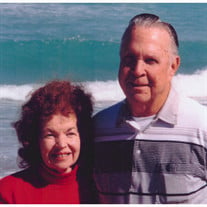 Betty Ann Wheeler Pafford, born in Miami on December 16, 1931, passed away on Tuesday, February 20, 2018 in Tallahassee Florida. During the end of her journey, Betty was surrounded with love by her husband Jim, daughter Judi and son Jim at Big Bend Hospice. Betty grew up in Miami and attended and graduated from Miami Jackson High School in 1950. Her best friend Piercie Pafford Ehrlich introduced Betty to her big brother, Jim Pafford during a family gathering. Thereafter, Jim became her sweetheart and they enjoyed a beautiful love story for the past 66 years. Betty married Jim during his service in the United States Army in Folkston Georgia on October 7, 1951 and then, they relocated to Petersburg VA where Jim was stationed prior to being shipped overseas during the Korean Conflict. Their life together was filled with joy, compassion and love. During their marriage, they supported each other completely through good times with only a few difficult moments throughout the years. Betty's professional career as a working Mom included over 14 years working for the Dade County School System at Opa Locka Elementary School. Then, she and her husband Jim opened a printing business in Miami, J & B Press, where she worked for over 20 years by her husband's side, as co-owner and primary sales representative. Additionally, Betty also worked at Alterman Transport Company and after relocating to Tallahassee, the JC Penney Department Store where she was awarded "Salesperson of the Month" several times. Anyone who met Betty was immediately drawn to her with her beautiful smile, outgoing personality, sense of humor, intelligence and enthusiasm for life. She was dedicated to spending time with her "sweetheart" husband Jim after retiring to Tallahassee, FL in 1996 and deeply loved and enjoyed the company of her children, grandchildren and great-grandchildren whenever possible. She is survived by her husband of 66 years, James Gaylon Pafford, her son James Roy Pafford (Pamela Elizabeth Pafford), daughter Judith Pafford Wills (Herbert Wills IV), grandchildren, Jared Martin Taber, Jason James Taber (Deb Trusty), James Harold Pafford (Jessica Dennis Pafford), Amanda Elizabeth Pafford Capece (Christopher Capece), William Galen Pafford (Bethany Pafford), great-grandchildren, MacKenzie Pafford, James Pafford, Annabelle Pafford and William Pafford. She was preceded in death by her mother, Betty Amanda Wheeler, her father, Thomas Wheeler, her brother, Thomas Wheeler and her sister Patsy Wheeler. Family will receive friends Sunday, February 25, 2018, 1:30-2:30 pm at the Bethel United Methodist Church 1470 Bethel Church Rd. Tallahassee, with Funeral Service to begin at 2:30 pm. Burial will follow at the Church Cemetery. A Reception in Betty's honor will be held at the Church Fellowship Hall. Donations in memory of Betty Pafford can be made to the TMH Foundation and designated for the TMH Family Medicine Residency Program at www.tmh.org/foundation The family would like to extend very special thanks to Big Bend Hospice for their kind and thoughtful care for Betty during her stay there. Arrangements are under the care of Skip Young with Family Funeral Home & Cremation Services. 850-926-5919 Familyfhc.com

Betty Ann Wheeler Pafford, born in Miami on December 16, 1931, passed away on Tuesday, February 20, 2018 in Tallahassee Florida. During the end of her journey, Betty was surrounded with love by her husband Jim, daughter Judi and son Jim at... View Obituary & Service Information

The family of Betty Ann Pafford created this Life Tributes page to make it easy to share your memories.

Send flowers to the Pafford family.