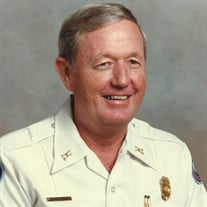 Bernard Walton Kemp, known as Bernie Kemp, of Sopchoppy, passed away November 20, 2016, at home with his wife and family. Although born in Sopchoppy January 27, 1936 to Dr. Malcolm & Bessie Kemp, Bernie lived in Rossville, Georgia with his mother, grandparents, and brother after the death of his father. He returned to Sopchoppy in 1954 after graduating from Rossville High School. He became a City of Tallahassee Fire Department employee on January 16, 1956 and in 1989, he retired as a Captain with 33 years of service. He and his brother in law, George Strickland, formed the S & K Honey Company and worked together for about 30 years. He was a Christian man who was very involved in his church, Sopchoppy Southern Baptist, where he served as a deacon and used his talents playing the organ and singing in the choir. Bernie was a member of the Sopchoppy Lions Club from 1959-2016 and served as club treasurer and in other positions. Hunting, fishing, camping, and taking trips to the mountains with friends and family were favorite pastimes. He also enjoyed carpentry, gardening on his property, and painting landscapes. Survivors include his wife of 38 years Sharon Roberts Kemp, father & mother in law Franklin & Gracie Roberts, many nieces, nephews and cousins. He was preceded in death by his parents Dr. Malcolm & Bessie Kemp, sister Eloise Kemp Strickland, and three brothers Malcolm Kemp, Tom Kemp, and Bruce Kemp. The family will receive friends Friday, November 25, 2016, beginning at 10:00 am at Sopchoppy Southern Baptist Church located at 117 Curtis Mill Road, with Funeral Service at 11:00 am. Interment will follow at West Sopchoppy Cemetery. Donations may be made to Wakulla County Senior Center Transportation Department, 33 Michael Dr., Crawfordville, FL 32327 or Sopchoppy Southern Baptist Church, PO Box 128, Sopchoppy, FL 32358. Arrangements are under the care of Skip Young with Family Funeral Home & Cremation Services. 850-926-5919 Familyfhc.com

Bernard Walton Kemp, known as Bernie Kemp, of Sopchoppy, passed away November 20, 2016, at home with his wife and family. Although born in Sopchoppy January 27, 1936 to Dr. Malcolm & Bessie Kemp, Bernie lived in Rossville, Georgia with his... View Obituary & Service Information

The family of Bernard Walton Kemp created this Life Tributes page to make it easy to share your memories.

Send flowers to the Kemp family.