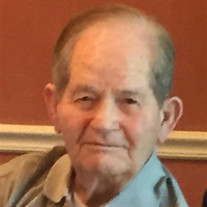 Adam Gee Thompson transitioned from this life to his everlasting life on September 28, 2019. He was born to Willie and James Thompson on April 25th 1928 in Carrabelle. He graduated from Sopchoppy High School with further studies at Lively Technical School. He enlisted in the Air Force and was sent to Bolling AFB in Washington D. C. during the Korean War. It was there that he met his wife of 68 years Anne Saunders at the local USO club. After retiring from NASA in Greenbelt, MD. he moved to Carrabelle Beach, Fl. where he was able to enjoy fishing and gardening. Adam was very active as a deacon, Sunday School teacher and a volunteer with the nursing home ministry with his church in Maryland. He was also a founding member of the Presley Manor Civic Association before returning to Florida. As a resident of Carrabelle he was a volunteer with the Camp Gordon Johnson World War II Museum. In addition to his wife Anne, he leaves 3 children to mourn his loss; Julia A. Boland (Dale), Susan D. Orton-Ramler (Don), and Michael W. Thompson. He is survived by 4 sisters and 4 brothers; Evelyn Daughtry, Ruby Duggar, Devone Harrell, Jewel Hirsch (Fred) James Thompson (Winola), Hasting Thompson, Glenn Thompson (Frances), and Wendell Thompson (Martha). He is also survived by 3 grandchildren; Michael A. Boland (Michele), Angela Harrison and Ryan Orton (Alli) and 5 Great Grandchildren; Cailin Boland, Michael D. Boland, Cami Harrison, Dane Orton and Josie Orton. He also leaves behind numerous nieces, nephews and cousins, he was preceded in death by his parents, a brother J. W. Thompson and a grandson Eric Orton. The family will receive friends Wednesday, October 2, 2019 from 6:00 to 8:00 PM at Family Funeral Home at 84 Ochlockonee Street in Crawfordville and the funeral will be Thursday, October 3, 2019 at 2:00 PM at the Tallahassee National Cemetery, 5015 Apalachee Parkway in Tallahassee. Contributions may be given to Crooked River Lighthouse P.O. Box 376 Carrabelle, Fl. 32322 or The Camp Gordon Johnson WW II Museum P.O. Box 1334 Carrabelle, Fl. 32322 or a charity of your choice in honor of Mr. Thompson. Skip and Trey Young with Family Funeral Home 84 Ochlockonee Street in Crawfordville are assisting the family.

Adam Gee Thompson transitioned from this life to his everlasting life on September 28, 2019. He was born to Willie and James Thompson on April 25th 1928 in Carrabelle. He graduated from Sopchoppy High School with further studies at Lively Technical... View Obituary & Service Information

The family of Adam Gee Thompson created this Life Tributes page to make it easy to share your memories.

Adam Gee Thompson transitioned from this life to his everlasting...

Send flowers to the Thompson family.